I finished the 2020 Goodreads Challenge with 51 books read!  That’s 11 more books than my goal of 40 and 6 more books than I read in 2019.  Part of that growth can be attributed to the pandemic this year, but I think part is also creating more time for self-care.  Immersing myself in fictional worlds is one of the best ways to remove my daily stresses.  For the 2021 Goodreads Challenge, I decided to stick with 40 books.

At the end of 2020, my bag of books in the closet was almost empty.  My bag of books contains used books purchased at the public library &/or local non-profit used book sales.  I usually attend two or three of these events each year and leave with a canvas grocery bag full of books.  It’s thrilling walking along the rows & rows of tables filled with books scanning spines for particular authors and interesting titles.  It’s like a scavenger hunt!  But due to the pandemic, these were canceled in 2020.  To restock, I’ve purchased a few new reads from the independent bookstore, Nowhere Bookstore, and borrowed books via curbside-pick-up from my public library.  I’ve already begun one of my new books, “Rage of Dragons” by fantasy author, Eric Winter (nice last name.) 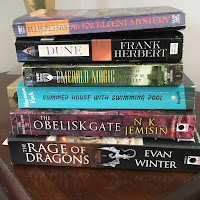 My favorite genre to read is fantasy.  My first book feature for this post is actually the first two books in my new favorite trilogy, N K Jemisin.  The New York Times’ honors Jemisin with this statement: “the most celebrated science fiction and fantasy writer of her generation.”   My next recommendation is a contemporary fiction novel that was made into a movie in 2019.  Lastly, I thought I would have a ‘cozy’ mystery recommendation, but the ones I picked up during the last couple of months of 2020 turned out to be just ok with three-star ratings.  So my mystery recommendation actually goes back to earlier in the year when I read a series of twelve Sherlock Holmes stories.  (Click book covers for Goodreads links.)

Fantasy - I first heard about N K Jemisin’s Broken Earth Trilogy from The Overdue Podcast.  They did an episode on Book 1, The Fifth Season.  Jemisin creates a unique world called the Stillness that experiences disastrous seasons that last generations.  The magic system called Orogeny allows Orogenes to feel, or ‘sess,’ and control the earth’s movements.  As much as I tried to savor these books, I devoured both books 1 & 2.  Book 3 is on my shelf waiting to be read.

In a single day, Essun, a woman living an ordinary life in a small town, comes home to find that her husband has brutally murdered their son and kidnapped their daughter.  Meanwhile, a great red rift has been torn into the earth, spewing ash enough to darken the sky for years.  Now Essun must pursue the wreckage of her family through a deadly, dying land.
Fiction - Where’d You Go, Bernadette is one of those books that everyone was reading.  It had a resurgence in popularity in 2019 when the movie was released.  I finally got around to reading it in 2020 and I’m glad I did.  Is it realistic, no.  Is it over-the-top, yes.  Did I love it anyway, yes.  This book was so hard to put down, which in part is attributed to the various points-of-view of these fantastic characters.

When her daughter Bee claims a family trip to Antarctica as a reward for perfect grades, Bernadette, a fiercely intelligent shut-in, throws herself into preparations for the trip. But worn down by years of trying to live the Seattle life she never wanted, Ms. Fox is on the brink of a meltdown.

Mystery - I read The Adventures of Sherlock Holmes in ebook format via iBooks.  These stories by Sir Arthur Conan Doyle were much shorter than I expected.  After watching the BBC tv series’ 90-minute episodes, I was expecting each story to be novel-length or at least novella length.  Instead, each story is about 30 pages long.  These twelve stories are told from Dr. Watson’s point of view (and yes I pictured Martin Freeman in my head the entire time.)  This collection starts with “A Scandal in Bohemia'' and includes favorites like “The Five Orange Pips” and “The Adventure of the Blue Carbuncle.”  It is clear that Conan Doyle’s style has served as the model for contemporary mystery writing. His clever writing kept me engaged and paying attention to each detail as I tried to solve the mysteries along with Sherlock & Watson.
*Pictures owned by me except Goodreads logo & book covers via goodreads.com & iBooks.
Posted by Snowywinds No comments: