Hiking in the Sky at Minnewaska

In September 2012, I traveled up to Burlington, Vermont to see Magic Hat and Ben & Jerry’s.  While there I did quite a bit of hiking, which I chronicled in my post Hiking Burlington VT, published in September 2017.  On the way back home, I made a few stops in Massachusetts and New York.  A friend and avid hiker recommended I stop in the Shawangunk Mountains, also known as “The Gunks.”  After doing some research, I decided to visit the Minnewaska State Park Preserve located on a ridge of “The Gunks.”  I am so glad I made that stop. 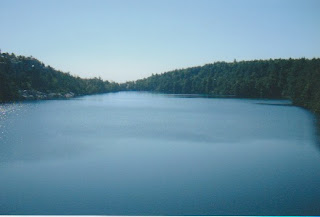 I parked my car in the Upper Parking Area (see park map below) right on Lake Minnewaska, a sky lake with pristine, clear water.  “The Gunks” were formed during an ice age that lasted from about 110,000 to 12,000 years ago. Glaciers had moved down from Canada, gouging out softer rock along the way.  The rocky outcroppings left behind are made of "quartz and more quartz" conglomerates and sandstones.

I decided to take the hike out to Gertrude’s Nose. Hikers can follow a looping trail that is about 7.5 miles in length.  The trail starts off sharing the Lake Minnewaska and Millbrook Mountain carriage roads.  The Gertrude’s Nose trail breaks off as a footpath about a quarter-mile from Patterson's Pellet, a large boulder left by a receding glacier. 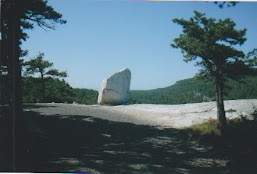 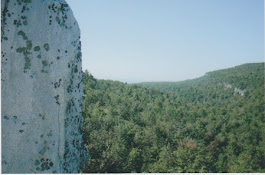 I experienced a difficult section where I climbed down a rocky crevasse, then back up the other side. After reaching Gertrude's Nose, I chose to hike back the same way I came, which was about 6 miles total. 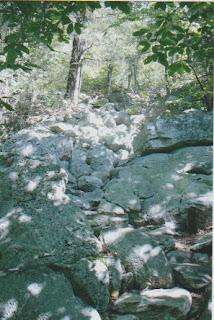 With the sun shining on my face, I hiked along the cliff's edge, 1200 feet high overlooking Palmaghatt Ravine and Palmaghatt Kill. The rush of being on the edge was amazing. As I looked out over the surrounding mountain range and valleys, I felt close to heaven. When I reached Gertrude's Nose, I sat on a boulder, ate my granola bar, and meditated on the amazingness of nature, creation, & our part in it. 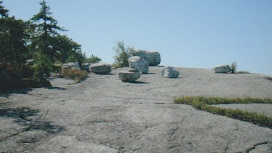 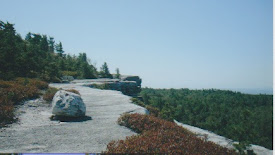 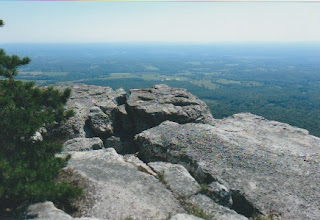 I definitely recommend this hike to anyone traveling in Southern New York State. Minnewaska State Park Preserve opens daily at 9:00 am year-round. Closing hours are posted at the Park Preserve entrance and are adjusted seasonally. There is a small fee of $10 per car. 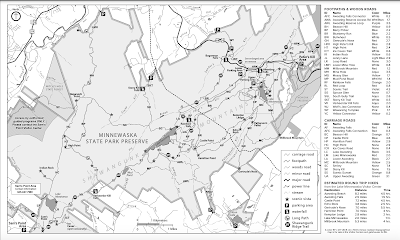 *All photos taken and owned by me with the exception of the Park Preserve map
Posted by Snowywinds No comments: