How do you Self-care?  I like to do yoga or jog, but teaching this year during the pandemic has been exhausting and this Winter was really cold.  Most of my self-care time has been spent reading.  My local library opened back up to browsing which helped supplement my depleted TBR (To Be Read) pile.  The arrival of Spring also gave me an excuse to get to the Midtown Scholar’s Saturday sidewalk sale.  Located in Midtown Harrisburg, this independent bookstore has been offering these Saturday sidewalk sales during the pandemic.  Included are a mix of new and used books, and I purchased a mix of 2 new and 3 used books.  It was nice to pick out some books I probably wouldn’t have known about otherwise. 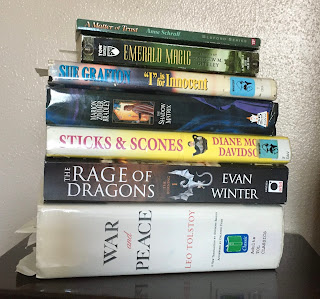 Since the pandemic is still placing a limit on things to do outside of the house, I chose to finally borrow War & Peace from my local library.  This magnum opus by Lio Tolstoy has been on my TBR list for over 20 years. I checked it out on January 21st. To date, I am halfway finished.  War and Peace is actually a book in four volumes.  Each volume is about 250-300 pages, so being halfway finished is like having two novels read.  I will have an update in my next book blog!

The three books being reviewed in this blog include two fantasy novels and one mystery.  Both fantasy novels are part of a trilogy.  The first trilogy is one I absolutely love, and I look forward to reading more books by this author.  The mystery novel is part of a series, each with its own ‘who done it.’  Like a TV mystery series (like Monk or Murder She Wrote,) books do not necessarily need to read in order to be understood.  In contrast, both trilogies to be discussed take the reader on a journey that must be read in order. (Click book covers for Goodreads links.)

Fantasy - Last month, the Overdue Podcast did an episode on the 3rd book of the Broken Earth Trilogy by N. K. Jemisin.  That episode is perfect timing because I just started to read Book 3, The Stone Sky.  I will be telling you about it in my next book blog; here I am going to tell you about Book 2, The Obelisk Gate.  In this book, the reader learns more about the history of the Stillness, the Guardians, and the mysterious obelisks floating in the sky.

The Season of Endings grows darker as civilization fades into the long, cold night. Essun has found shelter, but not her missing daughter. Instead, there is Alabaster Tenring, destroyer of the world, with a request that would seal the fate of the stillness forever. Nessun, Essun's daughter, is on her own mission to find Found Moon and meets the Guardian Schaffa.

Fantasy - If you like combat, battle, and fight strategies, Eric Winters Rage of Dragons is for you. Winter does an excellent job building the world of Omehi and its people.  For me, the constant reference to revenge and numerous fight scenes was too much.  I still gave the book four stars because it was very well written; just not my style.

The Omehi, a society built around war, has a strict caste system.  Young Tau, a member of the Lessers, seeks to escape the war until the fateful day when those closest to him are brutally murdered. His grief swiftly turns to anger. Fixated on revenge, Tau dedicates himself to becoming the greatest swordsman to ever live, willing to die a hundred thousand times for the chance to kill those who betrayed him. His pursuit inadvertently leads Tau to become his people's only hope for survival.

Mystery - Cozy mysteries continue to find their way into my reading list.  My favorite part though is the ‘punny’ titles.  They crack me up.  Diane Mott Davidson’s protagonist Goldy is a caterer who is continuously caught up in a murder mystery.  The first book I read was Chopping Spree, a title I couldn’t resist. Sticks and Scones is the third book I’ve read in the A Goldy Bear Culinary Mystery series.  This has been my favorite so far and received 4 stars. There was a medieval castle in Colorado, stamps, and a ghost!

When the sound of broken glass shatters her sleep, Colorado caterer and meddling sleuth Goldy Shultz doesn’t know what to think.  Is it a gunshot?  An earthquake?  Her husband Tom is away working a stamp theft case for the Colorado police department.  Goldy is on her own, and the timing couldn’t be worse, with an important catering gig only a few hours away.  The gig is an Elizabethan luncheon at a Gothic chapel on the grand Hyde Estate of nouveau rich Eliot & Sukie Hyde. Meanwhile, a ghost haunts Hyde Castle.

*Pictures owned by me except book covers via goodreads.com.
Posted by Snowywinds No comments: