I was going to be writing about hiking in Harpers Ferry this month, but this past week we (my husband and I) found ourselves hiking one of the most beautiful places in Pennsylvania and I have to write about it right away. My urge to write is so strong that it’s keeping me from what I should be doing, which is writing a paper for my grad class.

So, where was this beautiful place? Ricketts Glen State Park - smack dab in the middle of Pennsylvania. The drive was almost 3 hours: along the Susquehanna River and up and down the Appalachian Mountains. When we reached the park, we entered from Rt 487 at the Visitors Center. For the Falls Trail System, it is recommended that you park at Lake Rose Trailhead Parking. FYI - Cell service is scarce! 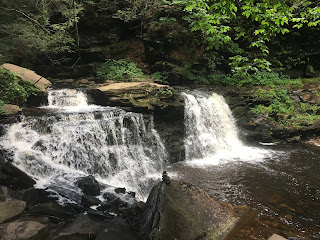 As we began the hike, I was overwhelmed by all the bright green moss and the lushness of the trail. It doesn’t take long to reach the first waterfall. And wow! The park has a total of 21 waterfalls ranging in height from 11’ to 37’ to the tallest at 94’. According to the park map/guide, the falls are mostly named after American Indian tribes, but a few are named after close family and friends of Colonel Robert Ricketts (the original landowner.) 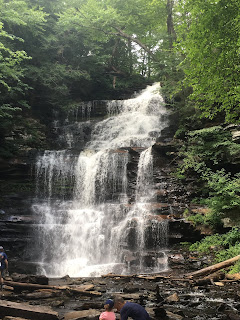 The trail that continues along the creek is composed of large flat stones. The flat stones are used for steps for steeper sections of the trail. The first third of the hike is primarily hiking down, while the second third is climbing back up from the bottom of the falls. There are beautiful falls along both stretches. The last third of the hike is flat, dirt trail, which is a nice release after climbing up 300 feet of switchbacks and creek bridges. 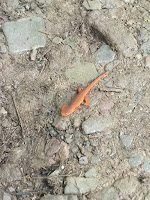 I took so many pictures! The sound of the water was relaxing. We encountered an orange Gekko. The trail was wet and humid, but the breeze coming off the cascading water was refreshing. Make sure to wear appropriate shoes and bring bottled water.
To see our adventure, click on this Youtube link:

*All photos taken and owned by me