Summer break is coming to an end. I recently heard on the House of Ed Tech podcast that August is one long Sunday night for teachers. I tend to feel torn between the excitement of a new school year (as I write this in early August, I have already looked at my rosters for the new year) and longing for more quiet time to relax and read. So I tried my best to focus on my most anticipated reads in my TBR pile. 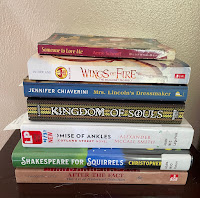 I finally finished War & Peace!  Continues to be more about the war than about the peace.  The final, and fourth, Volume of the book reads like non-fiction. Tolstoy is philosophizing on the decisions made during the Patriotic War of 1812 (as it is known in Russia) and the outcomes of those decisions.  He goes on about how victory is not based on the generals’ decisions, but on the morale of the military.  He reasons that Napoleon suffered defeat in Moscow due to the disorganization of the thousands of soldiers (pillaging the homes of Moscow even after many were burned to prevent just that.) Tolstoy then goes on to discuss Enlightenment theory on the free will of men as well as how power is earned. It reminds me of Machiavelli’s writing in The Prince. Tolstoy does not write as much about the characters in the second half of the book as opposed to the first half (Volumes 1 & 2.)  While the Epilogue finishes up the stories of some of our main character families, there are still several characters whose stories are left unfinished.  (What happened to Madame Bourianne? She just kinda disappeared.) As a reader, I was disappointed because I liked the characters & Tolstoy’s prose style.

The three books being reviewed in this blog illustrate my diverse interests in reading.  The first novel is by one of my favorite humor writers and his series that spoofs Shakespeare. I continued to include Black authors in my reading list.  The second book is an Afrofantasy novel.  The third book is a historical fiction novel taking place in the United States during the Civil War Era. (Click on cover images for Goodreads links.)

Fiction/Satire - Christopher Moore’s writing is hysterical.  I was introduced to him by a friend who lent me “Island of the Sequined Love Nun.”  Shakespear for Squirrels was published in 2020 (at the beginning of the pandemic.)  I kept waiting for my library to get it in, but they never did.  Maybe it was too bawdy? There is quite a bit of ‘frolicking’ and snogging.  But bawdiness aside, it is a humorous take on Shakespeare’s Midsummer Nights Dream (one of my favorite plays by the Bard.)  Pocket of Dog Snogging, Moore’s protagonist from Fool (King Lear) & The Serpent of Venice (The Merchant of Venice), returns in full motley with his puppet Jones, his apprentice Drool, and his monkey Jeff to take on Athens.

Pocket of Dog Snogging washes up on the sun-bleached shores of Greece and into deep trouble. He encounters a pair of runaway lovers defying the Duke and his minister. Meanwhile, the rascal fairy Puck is murdered. When Pocket is found with the body, he is arrested as the suspect and faces certain death. Queen Hippolyta, set to marry the Duke in three days, offers Pocket his freedom if he can find out who killed Puck. Pocket receives help from fairies on his quest to find the truth, save his neck, and ensure that all ends well.

Fantasy - Kingdom of Souls is Book #1 in the new trilogy by Rena Barron. I heard about this book from BookTuber Elliot Brooks, who included this title in a list of buddy reads for 2021. Like myself, Elliot Brooks is an avid Fantasy reader. This recommendation led me to explore the Afrofantasy genre as I continue to support Black authors. Not to be confused with Afrofuturism (ex: Octavia Butler and NK Jemisin) Afrofantasy includes myth, lore, and magic used to make up a world inspired by African cultures and the Black experience (Casira Copes, 2020.) Rena Barron did just that in a gripping Young Adult story about coming of age in a world with magic, demons, and personified gods. There are two primary themes 1) the desire to please one’s parents while also pursuing a destined quest, and 2) teen romance between rival households. It was difficult to put this book down! Arrah is a remarkable protagonist. I look forward to reading Book #2.

Heir to two lines of powerful witchdoctors, Arrah has yet to show their gifts. Under the disapproving eye of her mother, the Kingdom’s most powerful priestess, she fears she may never be good enough. But when the Kingdom’s children begin to vanish, she turns desperately to a forbidden ritual: trading away years of her own life for the power to find them. Arrah’s borrowed magic reveals a nightmarish betrayal. Now she must unravel her own mother’s twisted ambitions before the fight costs more than she can afford.

Historical Fiction - I only recently learned about Elizabeth Hobbs Keckley in an article I assigned to my students for Women’s History Month this past March. As I was browsing books at a local library books sale, my eye was caught by the title Mrs. Lincoln’s Dressmaker. This book by Jennifer Chiaverini is told from the perspective of Elizabeth Hobbs Keckley who was First Lady Mary Todd Lincoln’s personal dressmaker.

I must admit, I was very disappointed by this book. For the majority of the book, Keckley is an observer telling the stories around her instead of telling her own story. Additionally, the story reads more like non-fiction than historical fiction. There was not enough character development and perspective, for example, little was said about the harsh treatment she received as a save. For the entire second half of the book, I became angrier and angrier at Mary Todd Lincoln. Though Elizabeth was a free woman, Mrs. Lincoln used manipulation to enslave Elizabeth to her. Mrs. Lincoln did not expect this from her white family and friends. To summarize my thoughts on this book, here is a quote from an article by Linda Thompson of NPR on the HBO show The White Lotus: “Hiring someone whose profession is in the realm of ...domestic work and then transforming that bond into a personal one when it suits you is a pattern that has haunted relationships between rich white women and women of color for decades and centuries.”

In a life that spanned nearly a century and witnessed some of the most momentous events in American History, Elizabeth Hobbs Keckley was born a slave. A gifted seamstress, he earned her freedom by the skill of her needle and won the friendship of First Lady Mary Todd Lincoln. This sweeping historical novel illustrates the extraordinary relationship the two women shared, beginning in the hallowed halls of the White House during the trials of the Civil War and enduring almost to the end of Mrs. Lincoln’s days.