The Many Waterfalls of Watkins Glen

Our planet is truly amazing.  The way the forces of nature act on each other.  The way terrain changes over hundreds of thousands of years. Earlier this summer, I wrote about the Shawangunk Mountains that were formed by a massive glacier during an ice age. I recently visited another part of New York impacted by glaciers and 10,000 years of rivers and creeks flowing towards the Finger Lakes of New York.

Watkins Glen State Park features a 2-mile gorge formed when the last ice age glaciers receded. ‘Glen’ is a Greek word meaning “small, narrow, secluded valley.” The Glen Creek continued to cut away at the sandstone eroding the layers of sandstone and shale that formed 380 million years ago. A series of waterfalls and round flume holes formed amidst the rocks. Beginning in 1863, this secluded valley was opened to the public and started receiving tourist visitors. In 1906 it became New York State property.  During the 1930s, a stone walkway & walls were built by Civilian Conservation Corps. The 1.5 mile Gorge Trail explores nature’s beauty by sending hikers past 19 waterfalls. The highest waterfall, the Central Cascade, plunges more than 60 feet. 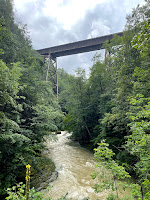 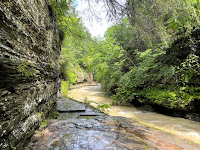 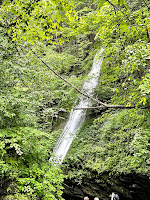 We reached Watkins Glen just as Mother Nature called up a thunderstorm dumping huge amounts of rainwater. We stayed in the car for a while and visited the gift shop to let the worst of the storm pass by. Prior to our trip, my parents advised us to “Shuttle up, Hike down.” So glad we had this advice. The upper elevation is 1,000 feet and the trail descends 520 feet to the lower entrance. Once the thunderstorm let up, we headed for the shuttle. As we hiked down, we could see the progression of the water’s erosion (take note of the early pictures compared to the later pictures.) The walls of the gorge were covered in shade-loving lush, green ferns. Water trickled down from the sides of the top of the gorge creating a few extra waterfalls, one of which we had to walk behind as we continued on the trail. The paving stones were wet from the rain, but it is important to note that the trail is normally wet from the falls and mist. Make sure to wear proper footwear. 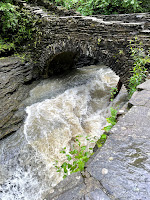 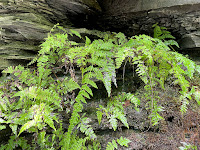 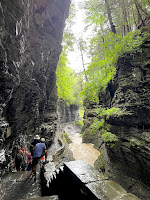 When visiting, also note that there is a fee per car of $10.  The shuttle is run by a separate company that charges $5 per person, but the fee is worth it! 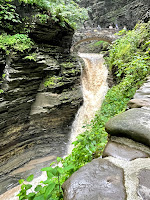 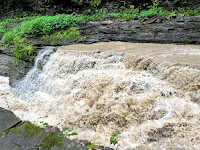 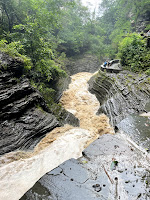 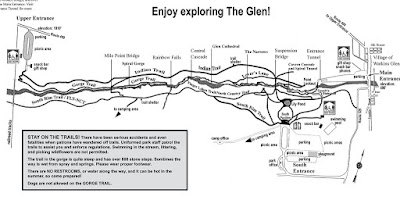